In a recent article for the New York Times (The economic consequences of cancelling Keynes, 1 June 2021), Paul Krugman rightly laments the elimination of Keynesian concepts in US economics:

“In the 1970s some economists began arguing that Keynesianism must be wrong, because the phenomena Keynes described couldn’t happen in an economy of perfectly rational individuals and perfectly functioning markets. (…) it soon became common knowledge that major journals would not publish anything overtly Keynesian. During my own early career, I and others simply took it as a fact of life that if you wanted to get tenure, you would have to build your publication record in subfields that steered clear of the core issue of depressions and how they happen; you could sometimes smuggle some Keynesian material into your papers, but only if it came wrapped in a model that seemed to be mainly about something else. So Keynes had in effect been canceled.”

“But the years of Keynesian cancellation had a heavy cost. Many economists entered the crisis ignorant of basic concepts that had been worked out many decades earlier, because you couldn’t publish those concepts in the journals or teach them in many (not all) graduate programs. This intellectual impoverishment, I’d argue, weakened and distorted the policy response: We had a much worse, much more prolonged slump than we might have had if the ideas needed to fight the slump hadn’t been suppressed.”

While Krugman’s plea for basic Keynesian concepts is convincing, it is surprising that just a few days earlier he published another piece for the New York Times („Krugman Wonks Out: What We Talk About When We Talk About Money“, 21 May 2021) in which he himself neglects key Keynesian insights.

In this piece, he asks the question: “But is the Fed really financing the budget deficit?”

His answer is: “Not really. At a fundamental level, households are financing the deficit: the funds being borrowed by the government are coming out of the huge savings undertaken by families saving much of their income in an environment where much of their usual consumption hasn’t felt safe.

However, household financing of the deficit isn’t direct. Instead, it has taken the form of a sort of financial daisy chain. Families are stashing their savings in banks. Banks, in turn, have been accumulating reserves — that is, lending to the Fed, which these days pays interest on bank reserves. And the Fed has been buying government bonds.”

All this does not sound Keynesian. In fact, Krugman argues along the lines of the classical model of the financial market (“loanable funds model”). In this model, there is only one all-purpose good that can be used simultaneously for consumption, investment, and as “funds” that can be saved and supplied to investors (Bofinger 2020). Barro and Sala-i-Martin (2004) state this as follows:

“One way to think about the one-sector technology is to an analogy with farm animals that can be eaten or used as inputs to produce more farm animals. The literature on economic growth has used more inventive examples – which such terms as smoohs, putty or ectoplasm – to reflect the easy transmutation of capital goods into consumables, and vice versa.”

If households decide to save, i.e., not to consume the all-purpose good, it becomes automatically available as a supply of “saving(s)” on the financial market. Thus, household saving is the only source of funds, as banks and the central bank are unable to produce the all-purpose good. Therefore, Krugman argues that the Fed is only a “financial intermediary for investors”.

How can one explain the financing of government deficits using basic Keynesian concepts? In the Keynesian model, money, banks and the central bank play a decisive role in finance. In this model, financing means the temporary provision of money (i.e., bank deposits). Money is not created by the saving of households, but by the lending of the banking system. Thus, the saving of households cannot have generated the exceptional increase of the US money stock. 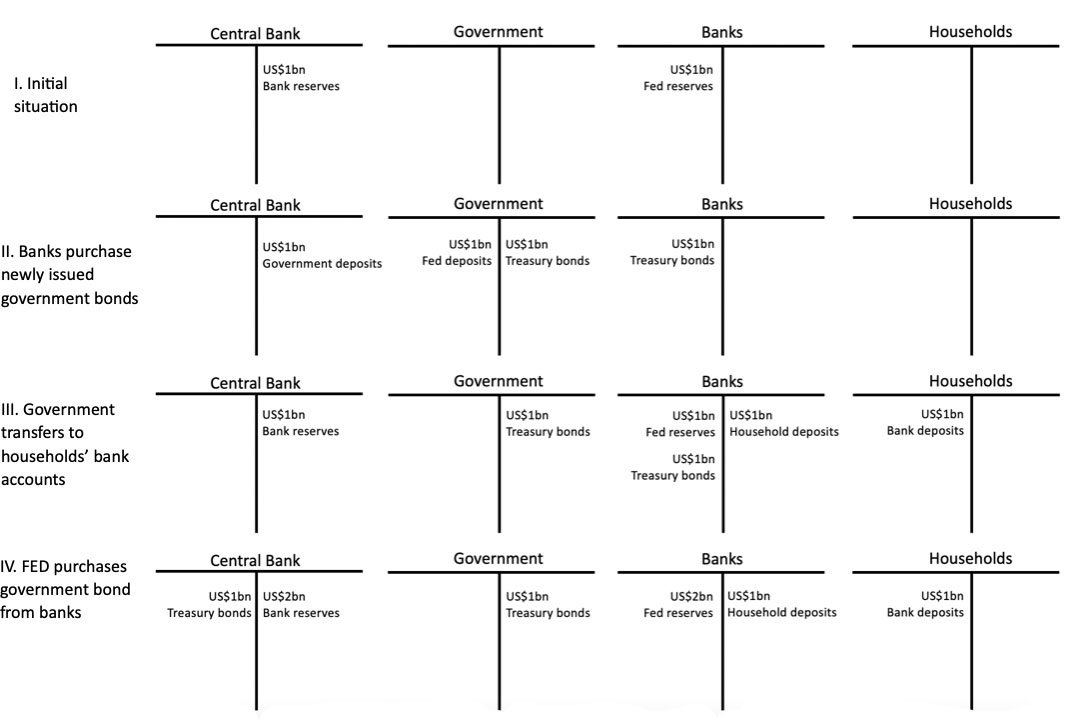 In the Keynesian model, the causality runs from government borrowing and huge transfers to higher household incomes which increase the money stock and enable higher saving (chart).

The above t-accounts explain this process in detail. 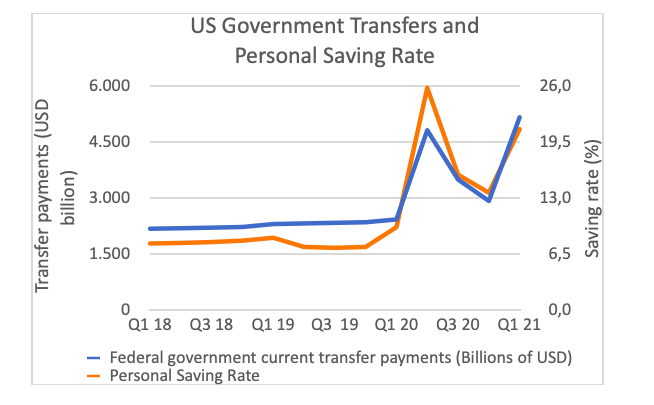 Thus, in the Keynesian model (and in reality), the is FED is anything but an intermediary. It is the financing engine that enables the government to make huge transfers, which are reflected in high saving rates and a strong increase in the money stock.

Thus, by arguing in terms of the classical model, which is a model for a corn or barter-economy, instead of the Keynesian model where money matters, Krugman runs astray. He neglects a key insight of the Keynesian revolution. In the words of Keynes:

“Most treatises on the principles of economics are concerned mainly, if not entirely, with a real exchange economy; and – which is more peculiar – the same thing is also true of most treatises on the theory of money. (…) The theory which I desiderate would deal, in contradistinction to this, with an economy in which money plays a part of its own and affects motives and decisions and is, in short, one of the operative factors in the situation, so that the course of events cannot be predicted, either in the long period or in the short, without a knowledge of the behaviour of money between the first state and the last. And it is this which we ought to mean when we speak of a monetary economy. … Everyone would, of course, agree that it is in a monetary economy in my sense of the term that we actually live. (…) The idea that it is comparatively easy to adapt the hypothetical conclusions of a real wage economics to the real world of monetary economics is a mistake.” (Keynes 1933, p. 408)

Krugman’s astonishing conclusion that households have financed the fiscal deficits confirms Keynes’ statement on the first page of the General Theory:

“(…) the characteristics of the special case assumed by the classical theory happen not to be those of the economic society in which we actually live, with the result that its teaching is misleading and disastrous if we attempt to apply it to the facts of experience.” (Keynes 1936 [1973], p. 3)

What does this imply for Keynesianism? If one of its most famous representatives falls back on classical patterns of thought when he tries to explain the world, there is still a long way to go before the consequences of its cancellation can be successfully overcome.